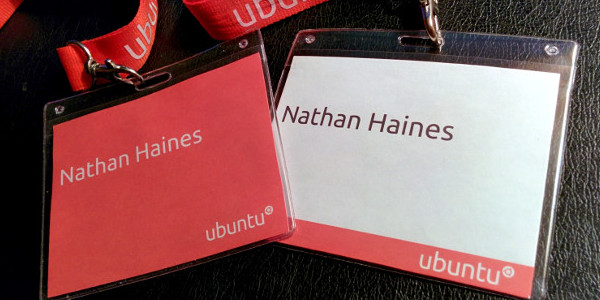 I take a lot of pride in the work I’ve done for Ubuntu. I’ve met so many wonderful people, made incredible friends, been to unique shows, run booths, been featured at conventions, published magazine articles, and even been on the radio.

I’ve always enjoyed being a public face for Ubuntu; someone you can come up to and ask questions and have discussions about the operating system, its goals, and computing in general. I haven’t always enjoyed the lack of design work done for the community after the Ubuntu branding changed in 2010. While Canonical designed sleek and modern-looking branding assets, the design team was never given the resources to make sure that the community had the most basic materials. The brand asset guidelines are spectacular but they are also difficult to apply fully. I’ve been very vocal about the need for name badges or business cards, and while I was touched by the efforts of certain persons to get new business card templates out to the community, it was eventually for naught. I worked on creating new ones in time for Ubuntu 12.04 LTS but I burned out along the way. I did manage to print cards for SCALE11X in 2013 but they didn’t come out right.

There’s a funny thing about community, though. It’s something you belong to but it’s also something that gives back. This year at SCALE12X I worked hard to get the Ubuntu booth in a shape that I was proud of and worked with volunteers from the Ubuntu California LoCo to show off Ubuntu. While some were interested in the Kubuntu, Xubuntu, and Lubuntu computers we had on display, the cell phones we had running Ubuntu was even more popular than the year before. Canonical was kind enough to provide two Nexus 4s running Ubuntu, and myself and another volunteer also had phones running Ubuntu. And while the expo floor was busy and exciting, I was really struck by the enthusiasm and generousity of various community members who were at SCALE. First and foremost, Jono Bacon was around and quite busy, although he definitely made time for me. I have to say that I talked to him more this year than probably in the last seven years combined. He’s been speaking and exhibiting for a long time, and I was pleased when he noticed some of the booth and design work I had invested in for SCALE. Jono is a really sincere guy, and if you’ve ever spent time with him you know how infectious his optimism can be. Jorge Castro was around and happy to see me, and I had the pleasure of meeting Marcos Ceppi for the first time. Everyone stopped by the booth for as long as they could spare and spent time greeting visitors and talking about Ubuntu. José Antonio Rey was also at the booth all weekend. I knew he was a newly-elected member of the Ubuntu Local Community Council but I had never met him or interacted with him before. He really amazed me with his friendliness and energy. He’s as good working the booth as I am today, and he never hesitated to pitch in. Robert Wall was immeasureably helpful as always and Elizabeth Krumbach was so busy speaking at SCALE (four times!) that she only dropped by the booth each day to say hi. But I was able to catch up with her briefly. She’s another person who is an incredible member of the Ubuntu community. I even got to talk with Amber Graner again, which was a real treat. Not to mention Eric Stolz, Matt Mootz, George Mulak, and others who volunteered at the Ubuntu booth at SCALE.

It’s impossible to work with incredible people and not be affected by it. Running a booth is really hard work, and having such skilled and talented people around makes the work so much easier. Without ego or the slightest appearance of effort, everyone worked together to provide an exciting booth for SCALE attendees. And throughout various talks I had with each of them, I remembered what I loved about the Ubuntu community.

It’s really important to be able to put your best face forward in all of your projects in life. And I think that it should be easier for Ubuntu members and advocates to proudly identify as part of the Ubuntu community. So I quit being annoyed at the two things that bother me most and, after recovering from SCALE, I’ve done something about them in time for the next LTS cycle.

I’ve taken a simple design reminiscent of the UDS name badges and created two name badges that elegantly identify volunteers who are representing Ubuntu. They are perfect for shows, booths, expos, release parties, installfests, and anywhere else it’s important to show your assocation with Ubuntu. There are two designs. The first is a striking orange name badge which is perfect if you hate ink, and there is an elegant white name badge> which is perfect for when you need something a little more understated. Both are available at SpreadUbuntu and are available in the public domain. I’ve also added them to the Ubuntu Advocacy Kit to make them more easily available to LoCo teams and community champions who are focused on bringing Ubuntu to others. These badges are ready to print as-is but also make a quick starting point for custom name badges. 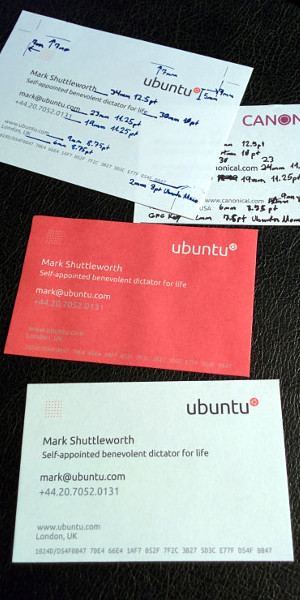 One of the most prominent perks of Ubuntu membership is the right to print business cards with the Ubuntu logo. For the last 4 years there haven’t been good, solid cards that reflect the new branding that the Ubuntu project has enjoyed, although Jacob Peddicord and Murata Nobuto have come just short of perfection in my opinion. Canonical and Ubuntu are partners, and I envisioned that matching business cards would help illustrate the intertwined relationship we share. Thanks to the assistance of Paul Sladen and Marco Ceppi, I had what I needed to produce a sleek, clean business card design that looks stunning and professional all at once. I spent quite some time reviewing the existing design I had, and expanding upon it—providing space for project roles, extra contact information, GPG keys, and more.

With a stunning orange design, Ubuntu members will be able to share their contact information with pride. I’ve also created a white design that is perfect to use when color matching is a concern. These two designs are fully customizable and are twins of their Canonical business card counterparts. With Ubuntu 14.04 LTS nearing and a bold new roadmap that puts Ubuntu on devices all around us wherever we go, this is the perfect time for project members to carry around strong Ubuntu business cards.

I’m an Ubuntu community advocate. It’s what I love to do and what I do best. I’ve been fortunate enough to work with incredible people only two months into the year, and it’s been revitalizing. I’m looking forward to expanding my efforts in the Ubuntu community this year, and I’m proud to show my Ubuntu pride along the way.