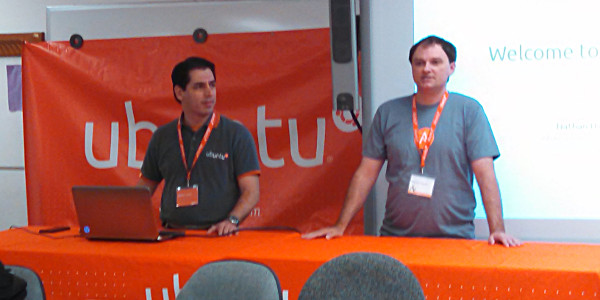 Last Saturday, Ubuntu held an installfest along with the Orange County Linux Users Group (OCLUG) in Fullerton, California. Thanks to the enthusiasm of OCLUG and its members, and the assistance of volunteers from the Ubuntu California Local Community Team, the event was a success.

OCLUG used to hold Linux installfests all the time, but has been fairly dormant the past couple of years, with meeting attendance small but consistent. Late last year, they considered holding an installfest as a way to get more interest from students and the community. The LUG agreed that it was best to promote a single distribution to reduce confusion and that teasing or jokes about other software—even though good-natured—was to be avoided during the event. A simple majority agreed that a default Ubuntu install was the best distro to offer to new users and it was agreed that anyone who came in wanting to install specific software would be welcomed as well. This was a compromise that everyone was happy with and it allowed the installfest to be a focused event. OCLUG meets once a month at California State University Fullerton, and so advertising for the event was done with flyers, which were posted around the campus and in nearby coffee shops. It contained a simple pitch for Ubuntu, a URL for OCLUG and a QR code for the OCLUG installfest information page. We also emailed school faculty with information about the installfest, attaching a PDF of the flyers as well as a single-page “talking points” flyer that had a bulleted list talking about Ubuntu, installfests, and OCLUG, to encourage faculty to discuss the event with their students.

Ubuntu California supplied their secondary banner and table cloth, and Canonical arranged for reimbursement for pizza costs. Both were funded via the Ubuntu community donations from the Ubuntu download page, so I am very grateful to the generosity of the community. Canonical also provided Ubuntu 14.04 LTS discs and a conference pack with giveaway items. I designed name badges for both the OCLUG volunteers and the installfest attendees, and I also adapted the installfest liability release forms and data sheet forms from the Installfest HOWTO so that they matched the flyers and other documents.

When the day of the installfest finally arrived, we had four Ubuntu volunteers and nine OCLUG volunteers. We had 7 attendees, with 4 who brought their computers for an install and 3 more who simply wanted to attend and learn more about Ubuntu. Everyone arrived on time and enjoyed the donuts and coffee provided by OCLUG as is usual for their meetings. We had a greeter or two by the parking structure to direct attendees to the classroom. An OCLUG volunteer passed out the installfest forms and I had the Ubuntu volunteers distribute a standard swag pack for each attendee: Ubuntu lanyard, sticker sheet, pen, button, and Desktop install disc. Stephan Ingram, the president of OCLUG welcomed everyone and introduced me, then I gave my presentation to the group. I briefly discussed operating systems and the ideals of Free Software so that I could go into detail about what and why Ubuntu offers a complete computing solution that is elegant and easy to use. I described the Ubuntu and local Linux communities, and then quickly explained the release forms and discussed some USB keys that were available for purchase. Then installation began.

Everyone helped out and the attendees were able to get Ubuntu installed on their machines and have conversations about computer and software, and everyone had a good time. I burned some 32-bit Ubuntu discs for a couple attendees and passed out the Xubuntu discs I had prepared for slower machines. The pizza came, and while everyone was eating I showed off Ubuntu on my phone, demonstrating phone and desktop convergence using the Weather app. After the pizza was finished, I returned to the front of the room to demonstrate the key features of the Unity desktop interface, discuss the benefits of Unity’s online search and how to turn it off, and how to enable Autohide, change the desktop background, and use the Ubuntu Software Center and the Unity Dash to search for and install applications. Using Stellarium as an example, I then proceeded to launch and demonstrate this virtual planetarium software as an example of the rich content available with Free Software solutions.

We ended the installfest with a giveaway. I drew names of attendees and we gave away an Android tablet and an external phone/tablet battery provided by OCLUG members, and then we gave away three exclusive Ubuntu Cloud t-shirts provided by Canonical in their conference pack. By the time the installfest was over, we had installed Ubuntu successfully on every target machine, passed out 35 Ubuntu Desktop discs and 3 Ubuntu Server discs, sold 5 USB drives, and impressed a faculty member who promised to promote the next installfest to his students because he said there was no reason they should have to pay for scientific software if they could have high quality software for free. He also discussed academic year timing with the OCLUG president and based on that there are preliminary plans to repeat the installfest in September when we should be able to attract more students.

Looking back, the flyers were designed for on-campus use but traveled further, so they should give a little more location context, and the installfest page should probably include specific event information instead of relying on the OCLUG main page. We only had a 4-hour window for the event and I still feel this isn’t quite long enough. I didn’t have much time to dedicate to the Ubuntu volunteers, all of whom were volunteering for the first time and while I felt bad about this, they all stepped up and excelled in a way that made me very proud. For September, I intend to engage the university’s radio, television, and newspapers to help spread the word a bit further on campus.

Photos of the event are available to download at http://people.ubuntu.com/~nhaines/images/events/2014/oc-installfest-may/

I’d like to encourage anyone in the Ubuntu community to modify and adapt any printable resource that would be helpful to them. All printable media as well as the source documents, the main presentation, and sanitized attendee records are available to download at http://people.ubuntu.com/~nhaines/documents/events/2014/oc-installfest-may/